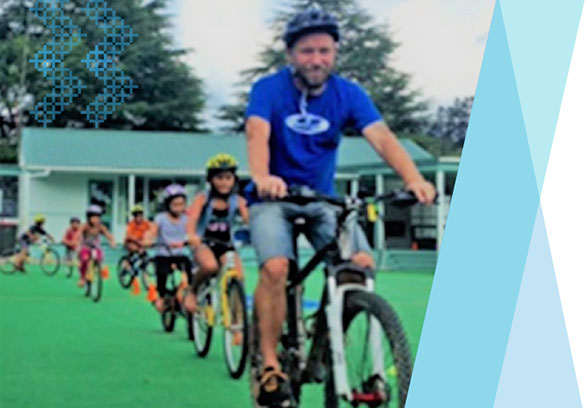 Blue Light Whakatane and its coordinator Richard Hamer have been busy creating positive activities and programmes for children and young people in the community.

Blue Light is a national organisation with local branches, which aims to forge connections between the police and the public. It’s run jointly by a committee of police and community members.

Richard has been doing youth and community education work for 25 years, in both Wales and New Zealand. He is a keen cyclist, and he has made mountain biking and cycling a central feature of how Blue Light gets young people onboard in the Whakatane area.

As a charitable trust, Blue Light successfully applied for funding for 12 bikes originally, and it has just acquired 12 more, Richard says.

“Kids and teens enjoy biking, it’s a relatively low-cost physical activity, it’s fun and exciting, and you get to go into some really great environments,” he says.

Not only does Blue Light get kids outdoors and give them new skills, but it also offers a positive and supportive space, he adds.

“It’s a challenging time in their lives with all sorts of things happening. It’s quite amazing how resilient kids are.

“In a normal week, at least two days will be outdoors, so I’m getting to do two things I love: working with young people, and mountain biking.”

With Richard as the driving force, a number of experienced local bike riders have now completed one of these qualifications – growing the skills and capability of the community, and adding capacity to deliver more cycling programmes to the people of Whakatane, both young and old.

Five graduates have come out of the programmes, and four more are going through their training now, Richard says. He says the on-job training model is a great option for a volunteer-based organisation like Blue Light.

“I always felt in the past that I would have to go off somewhere to get trained and assessed, which put me off doing training. But having these programmes, which are practically based and locally delivered and assessed, is awesome.”