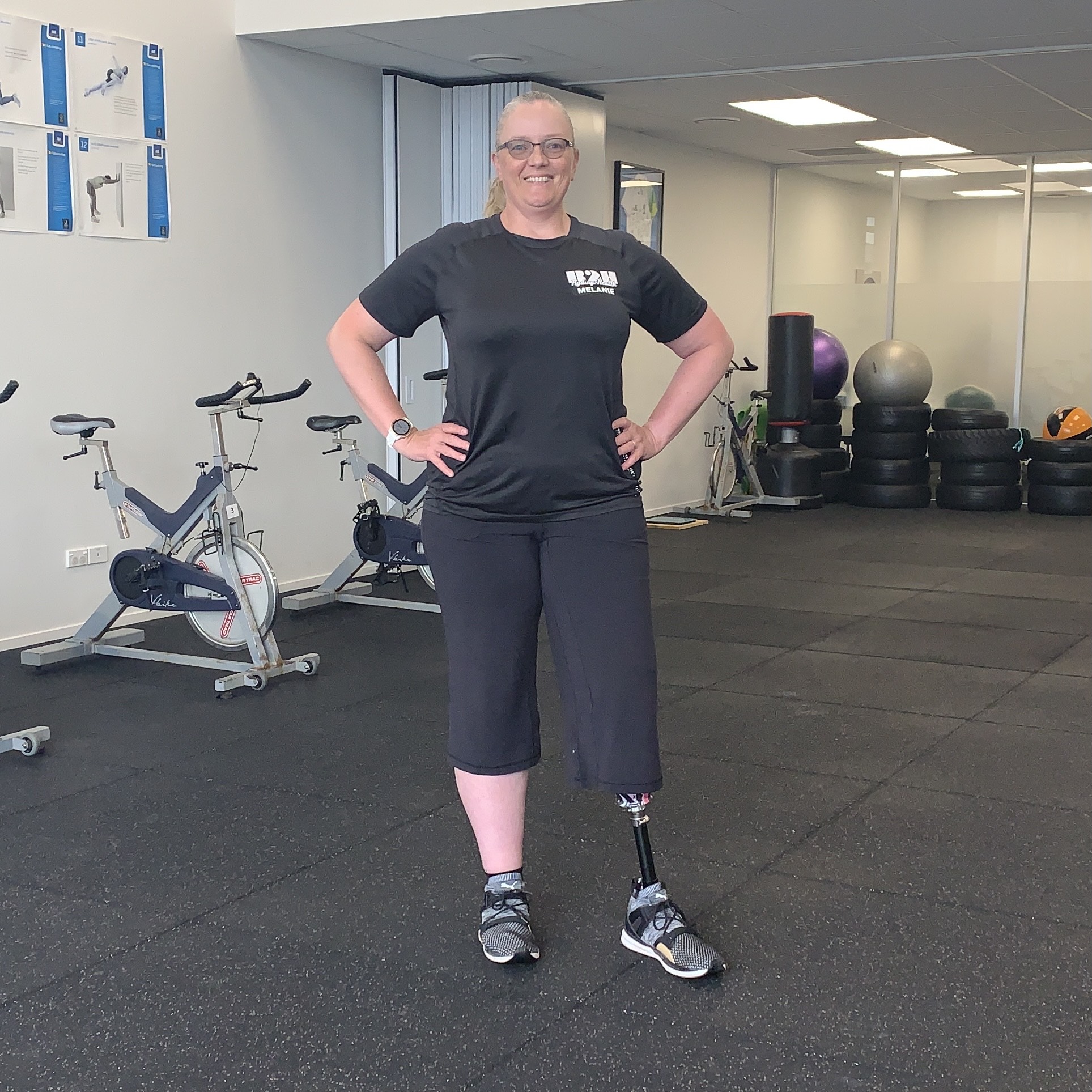 Melanie Ryding doesn’t make a habit of listening to the words “you can’t”. This extraordinary UK expat runs a successful personal training studio, trains for multisport races, works on her Skills Active apprenticeship – and is recovering from a lower leg amputation.

Originally from the UK, keen triathlete Melanie came to New Zealand and decided on a life change after having worked as a special education teacher for many years. She completed a personal training qualification and started up her own business in Invercargill in 2014.

Despite being new to the industry and the area, Mel’s passion and drive saw her business, Ryding2Health, grow rapidly. Using Facebook as her main marketing tool, before long she went from being a mobile PT to moving into her own studio and adding more trainers as her client base grew.

“What seems to have occurred is I’ve taken my special needs thread into fitness,” Melanie says. “So I don’t target your run-of-the-mill gym bunnies and muscle buffs. I was interested in those people who fell through the cracks, hated gyms, and couldn’t find a way to like fitness.”

Melanie had lost 30kg herself before she eventually competed at international triathlete level – so she knew what it meant to have a hill to climb, and she also knew what was possible. Her life experience, empathy and sense of humour all helped her connect with her clients.

“For the same reasons that I had liked being a teacher, this was about helping people to change their lives in ways they didn’t think were possible.”

The path of losing a limb

Everything was going well with Ryding2Health. However, Melanie herself was often in pain. In 2019 she had started to experience discomfort and numbness in her left foot. The symptoms worsened and Melanie spent many months dealing with a series of doctors, many of whom didn’t listen or gave conflicting advice. It was eventually discovered that she had a blocked artery in her thigh. Although her medical team tried to fix the artery, in the end lasting damage had been done to her lower leg while the problem had remained undiagnosed.

“They said: Right, we don’t think there’s anything else you can do. You could keep your leg, but it will continue to have the pain and the lack of function.

“I thought, What the hell is the point of that!? It’s very nice having two legs but I need to be able to use them both. I said, can we do the amputation surgery tomorrow? The next date they could give me was five days later, so that’s what we did in October 2020.”

The shock of losing a limb would knock anyone. But with her trademark determination, Melanie decided not only to get her health and function back, but also to share the experience through a series of daily YouTube vlogs.

She didn’t want her newfound disability to be something that people avoided talking about. So instead, with honesty and humour, she talked through the whole process. This included surgery, wheelchair, crutches, prosthetic, and generally learning to live and thrive – and exercise – with one leg. Along the way she has mused on everything from bias and discrimination, positive psychology and coping with change, through to stereotypes, emotional attachments and disability rights.

If you would like to watch her daily vlogs, you can check them out here.

Taking on an apprenticeship

It was while she had to rest up physically that Melanie decided to enrol in the Skills Active Facility Operations Apprenticeship last year. This touches on her exercise and sport background, as well as her role looking after her studio and trainers. It also earns her points through REPs New Zealand, which is the professional development registry for exercise professionals.

“I had to stop working, and I felt like I was at risk of getting a bit out of touch. The apprenticeship was a good way of getting myself back up to speed. One of my other trainers did the online personal training qualification, so I knew how Skills Active worked. I was able to complete the assessments online, without the pressure to do it at a certain speed.”

Asked what she would say to other apprentices who are juggling life, work and qualification, Melanie says having a supportive workplace is the number one priority. Staying organised with lists and calendars also helps, she says, as well as keeping everything online, so it accessible whether she’s at work, at home or in a hospital waiting room.

Being a very goal-driven person, Melanie’s first goal was to get back to work part-time, after the surgery. She had achieved that at around the four-month mark.

Next up she is working through how to be able to return to her role as a massage therapist while only having one leg. She also wants to develop a local fitness service for the disability sector – wheelchair users, amputees, people with spinal cord injuries and more. At the same time, she is also trying to be careful not to do “too much too soon”, and is learning to find a balance so that her return to work happens at a sustainable pace.

On the fitness side of things, she wants to get back into multisport, and plans to be the first para-athlete to complete the Challenge Wanaka aquabike race.

Melanie says exercise is central to who she is and keeps her going. And she wants people to understand that fitness is for everyone, no matter what they look like or what health conditions they might have.

“That’s part of why I did the videos. I wanted people to see that it’s not all a bed of roses, and personal trainers aren’t all skinny and happy and bouncing around. Who would want a 50-year-old personal trainer with one leg, you might ask? Lots of people, actually!” 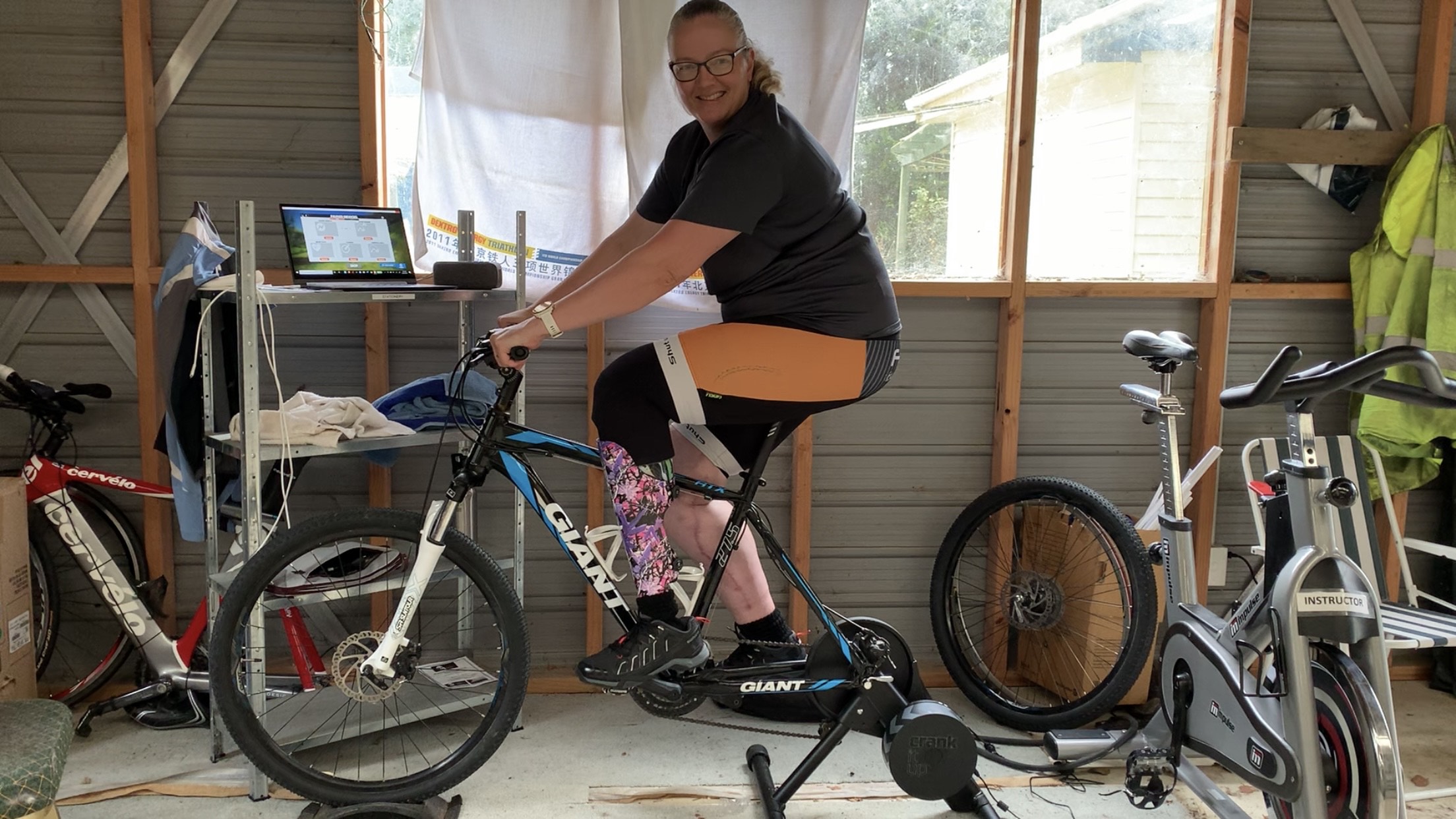 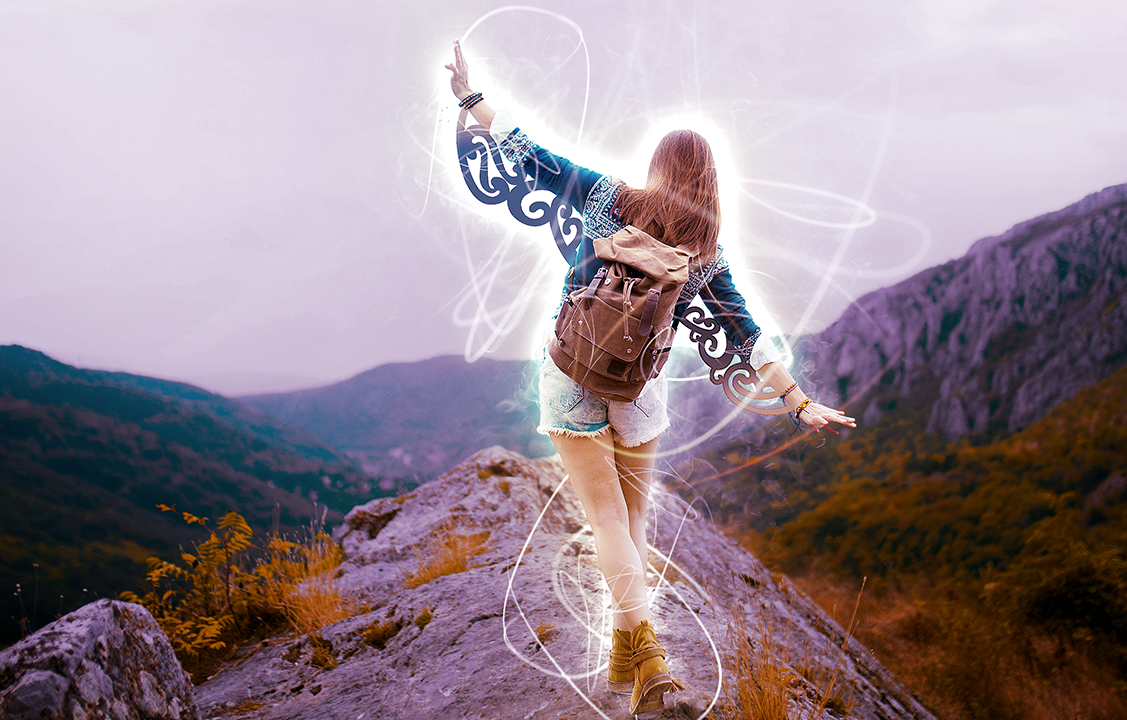 Supporting industry and facing the future: Skills Active reflects on 2020 in its annual report 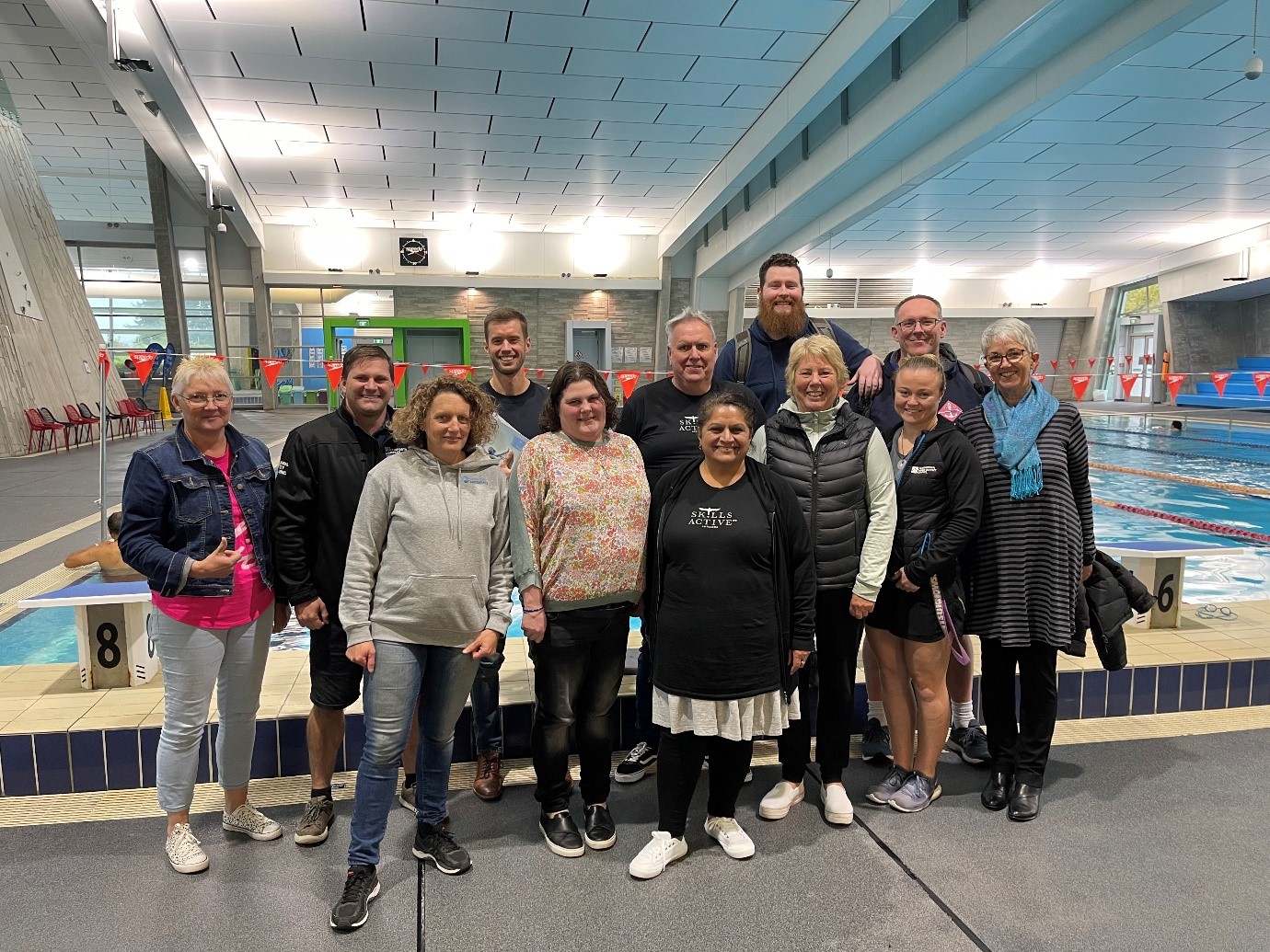 A team from Skills Active recently travelled the... 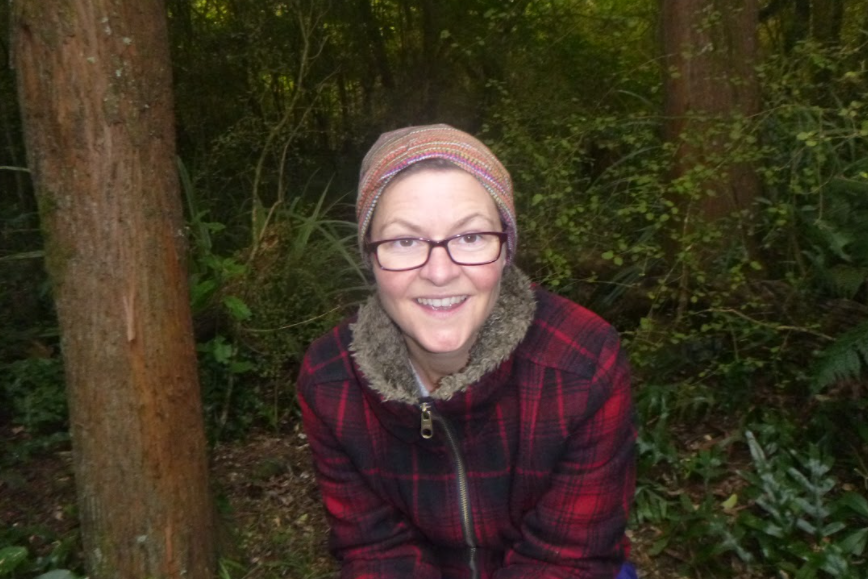 Nature empowers children to learn with all their...

Skills Active Aotearoa is committed to ensuring that...