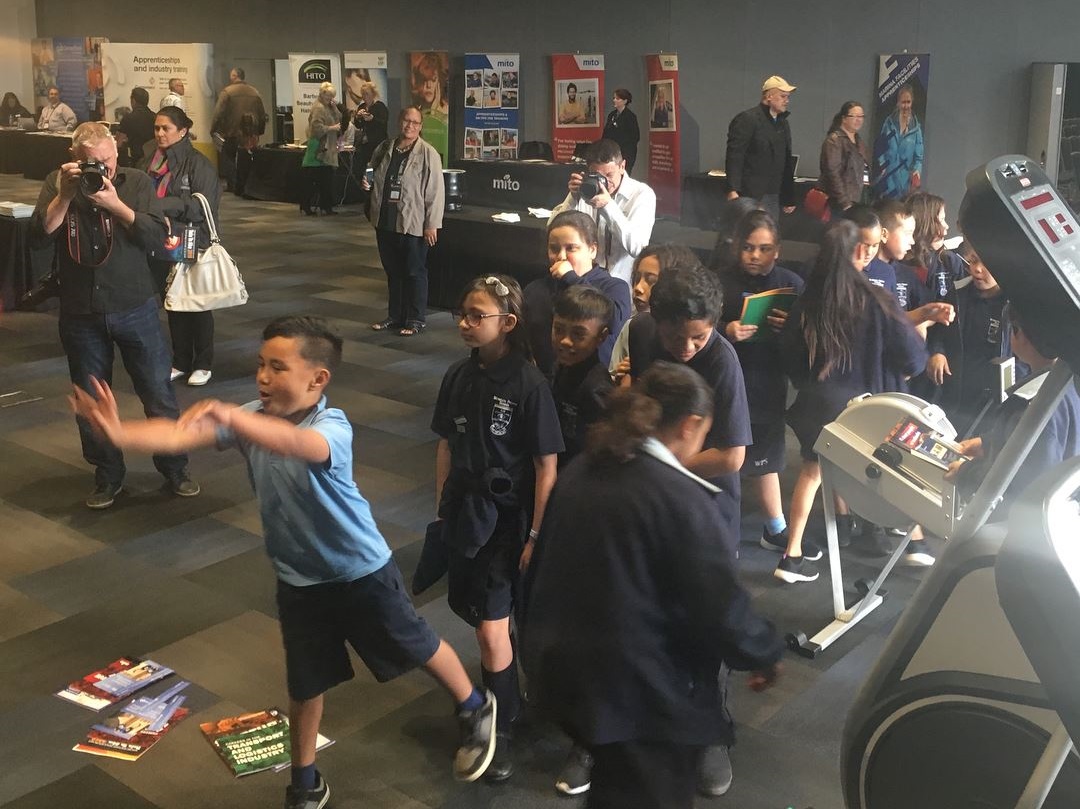 Industry training was the star of the show at this month’s Māori education hui, Tuia Te Ako, in Auckland.

Skills Active and its 10 fellow industry training organisations, which between them oversee the formal on-job training system of New Zealand, were co-hosts of the conference with Ako Aotearoa.

Students and young people from around Auckland visited the Vodafone Events Centre to check out interactive stands and earn-as-you-learn options for school leavers, while education sector professionals attended a range of workshops and presentations.

Speaking on behalf of Skills Active at the conference was Levi Armstrong, co-founder of Patu Aotearoa, who spoke about his experience growing a grass roots social enterprise that delivers cross training with a kaupapa Māori approach. Patu is spreading fast around the country. Levi currently has three industry trainees who began as participants.

“Sometimes we have guys who’ve done degrees [in sport and exercise] come in and say, ‘Hey can I be one of your trainers?’ But they actually don’t really understand the kaupapa. So I would rather look within the Patu whānau and build up those people.”

Another Skills Active speaker was Theresa O’Brien, who co-owns The Lab gym in Napier with her husband Patrick. Theresa talked about her journey from a young school leaver through to a business owner, with trainees on staff completing industry qualifications.

Theresa described how she and Patrick went into a gym that was closing down, to buy a piece of fitness equipment, and walked out having bought the gym.

“So it was a very spontaneous decision, but it came out of passion.  And I think for many Māori, we don’t get into business solely to make money and be profitable. We get into business initially to fill a gap and serve a need and whakamana our people.”

The third speaker for Skills Active was former league international Lyndsay Proctor, who worked with a cohort of trainee coaches in the Far North’s Taitokerau Rugby League.

“Now all of these coaches had been coaching for years. They weren’t young people. Some of them hadn’t looked at a book since school. But they did the work, and at the end we had 14 people who came out with a coaching certificate.”

“No matter where we are in life, if we keep achieving and keep striving we will get rewards. And it was there to be seen in the faces of those coaches and their whānau [when their certificates were presented].”

Skills Active chief executive Dr Grant Davidson said it was an honour to work in partnership with Ako Aotearoa and the other ITOs to deliver such an important event for all those with an interest in Māori educational success.

“I think it was a really valuable and inspiring hui for all those who attended, because it demonstrated just how broad the options are for trainees of all ages,” Dr Davidson said.

“At a time when we have record high employment, the jobs are there, and fewer people are choosing full-time study; instead they are choosing to work. And this event was all about showing how you can do that, and you can also pursue qualifications and better yourself, at the same time. So we were very proud to be part of it.”