Training with a purpose: Exercise for every body

News & events / News / Training with a purpose: Exercise for every body 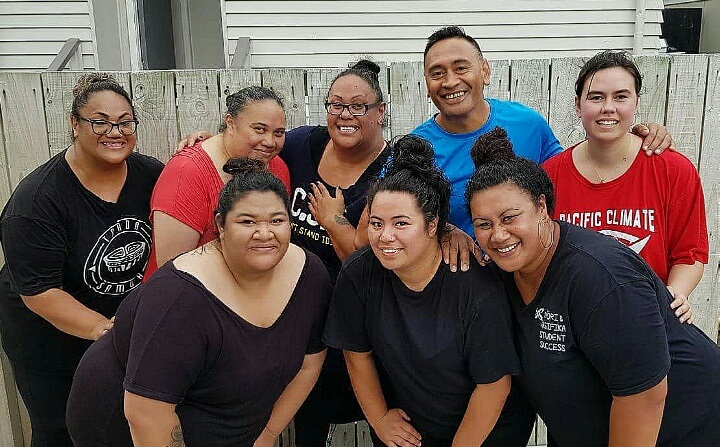 Fay Walker started her fitness journey with a walk to the photocopier. Now she is a woman on a mission to get others starting their journey.

Fay (pictured above, centre back) is an on-job trainee with Skills Active Aotearoa. As a volunteer for Pacific Health in Porirua, she is working in community exercise and completing a group fitness qualification at the same time. Prior to enrolling, Fay looked at the exercise on offer around her, and saw a lack of options for people who were bigger, but still wanted to get fit.

“Me and my sisters, we are big girls. One of the things that held me back from exercising was that I didn’t want to go to a gym, where I felt like people would look at me differently. And actually, they are not looking at you - they are all busy working out. But I just didn’t feel comfortable there.

“I’ve tried the six-week bootcamp too. And even though I’ve gone and had some amazing trainers, they didn’t really know how to adjust their training to me because I was such a beginner.”

A helper by nature, Fay’s main job is youth case manager and facilitator at Work and Income New Zealand. One of the first steps she took to get herself moving was switching the photocopier that she used at work.

“I just made sure my photocopies came out on the machine at the other end of the office. I did that for three months before I started on the next thing.”

Now, Fay is hard at work developing a unique service, ready to take out into the community once she’s qualified: 3 Digits is a chair-based class, especially designed for those who are 100kg plus, with a strong Pasifika theme. The modified exercises are low-impact and much safer for heavier people and those with limited mobility – but they still get hearts pumping.

“I’ve got four nephews who come along sometimes. When we first started, they said ‘Sitting down, it’s going to be easy.’ So I challenged them to come to the class. They found it really hard!”

Fay’s family have been an incredible support crew, she says. Her younger sister is one of her biggest motivators. Based in Australia, she has spent the past year recovering from a heart attack, which cost her her mobility – now she either uses a wheelchair or has to wear special boots in order to walk. She was just getting into exercising before the heart attack happened.

Then there’s Fay’s best friend of 24 years, who has a serious heart condition.

“If she does big workouts or even stands up for too long, it could actually trigger her heart condition,” Fay says. “So for years, me and her have tried on and off to exercise, but she’s had to pull back because it’s too much of a strain on her heart. Which is a shame because exercise is meant to help her heart!”

Now Fay’s best friend is attending the class and loving it. And Fay is travelling to Australia later this year to teach the programme to her younger sister so that she can take part online once Fay is qualified. Meanwhile, her older sister, who lives with her in Porirua, is also her biggest supporter and helped her to develop the 3 Digits exercises.

While 3 Digits is open to everyone and whole families take part, Fay is also doing one-on-one fitness coaching for women only – especially for those who are new to fitness or recovering from an injury. She is on a mission to empower other women to exercise, and to share the message that being fit doesn’t mean you have to be skinny.

“Women who have never done any exercise can try it. It gives them that confidence to get started. There shouldn’t be any barriers to wanting to have a better life.”